Welcome to the first issue of the ChinaEconTalk newsletter, your weekly window into Chinese-language coverage of business, technology, and the broader economy, brought to you by co-writers Huang Sizhuo and Jordan Schneider. Please send more interesting articles to translate our way!

Add us on WeChat here:

Foreign investors have lost billions expecting a Chinese financial crisis that hasn’t come yet. So what gives? According to the Rhodium Group’s Logan Wright, it’s not China’s domestic savings rate or RMB-denominated debt that’s keeping the economy afloat, but rather the government’s credibility.

In the wake of Huawei CFO Meng Wanzhou’s arrest on December 1 in Vancouver, we’ve been reading long analysis from China of Huawei’s history, especially stories that focus on its international ambitions.

Most American coverage of Chinese popular opinion on the Huawei story has come from bombastic Global Times articles or CEOs excoriating their employees for purchasing Apple phones. But the following article, written anonymously and first published in the Beijing Cultural Review on December 6, has garnered more than 100,000 views and 4,000 thumbs-up in one week, and is not your run-of-the-mill state propaganda piece. It provides a detailed, analytical perspective of the broader political, business, and technological dynamics impacting Huawei. Of course, it also does shamelessly apologize for a beleaguered company determined to compete at the highest level internationally, claiming it finds itself “bullied” by foreign governments and foreign telecom companies.

We’ve taken the liberty to excise large chunks for clarity, including a section that delves into the technical aspects of the development of China’s telecommunications network. But the rest should still give you an idea of how some Chinese commentators view the Huawei situation.

5G前夜的定点清除：美国“围猎”华为始末｜On the eve of 5G, they were determined to clear the field: America’s ‘Hunting Grounds’

The good news of a temporary cessation of trade hostilities had hardly been digested when Huawei’s chief financial officer, Meng Wanzhou (daughter of Huawei founder Ren Zhengfei), was arrested in Canada at a special time; she now awaits extradition to the United States for trial. The cause? Huawei is suspected of selling U.S.-manufactured items to Iran as part of a sanctions fraud.

Why Huawei? Why China?

Huawei has never played the “emotional card,” never blustered about how its products are “Made in China,” and has never been a “patriotic” kind of company, even though there’s an advantage to be gained with this approach, considering China’s 1.4 billion potential consumers and supporters. Huawei has a price advantage, has certain technical advantages, and has become one of the drafters of industry standards; it is among its industry’s major suppliers, technical patent holders, and technical contributors. Yet none of this has prevented Huawei from becoming a target of others in the industry, all of whom wish to see its demise.

The landscape in this new world is undergoing major changes. All countries (or regions, groups) are very obviously already in the process of splitting apart and picking teams. Economics and trade are inseparable from politics, and there’s nothing companies can do about it. After all, this is a problem at the national level. Moreover, the political systems in China and foreign countries are different, and a government led by a single party will have thousands of differences with a government where multiple parties rotate rule.

Through globalization, manufacturing transfer, and division of labor, the U.S. stands at the top of the information age technology — that is, at the top of the supply chain. Europe, Japan, South Korea, and Taiwan are on the second floor, while China is now more in the “assembly” stage. The supply chain is cut off, resulting in “no rice in the pan”; all that’s left is to wait for death with no way to resist.

[Translator’s note: The article goes on to list 10 ways in which Huawei is “targeted in such a manner,” i.e., how and why it’s “hunted” by the U.S. We’ve translated a few of them to give you an idea.]

The standard specification gives new entrants a more difficult threshold to pass. To enter, you have to first meet the existing standards and meet the existing industry rules. The telecommunications infrastructure industry is an IP-intensive industry. For example, the “Qualcomm Tax” in the mobile phone industry is typical. Qualcomm basically controls the pricing rules of the industry through patent authorization and cross-licensing. You need to use my things; even if you are as powerful as Apple, you have to pay the corresponding fee.

Technical barriers. Say you, as a country, are a latecomer, or you are a new business — where is your advantage? The painful lesson of the ZTE incident is, because of a single sanction, China’s second, the world’s fourth, the U.S.’s fifth [largest telecommunications equipment maker] — and a company with more than 80,000 employees — experienced a shock overnight, with those at the state level forced to mediate, accept fines, and accept supervision. The supervision period will last for as long as seven years. Because of a paper sanction, ZTE’s 5G strategy was delayed nearly three months, and it has comprehensively hit customers, suppliers, and partners along ZTE’s entire chain, and has brought ZTE great uncertainty.

In March 1998, when Huawei was only three years old, it passed a company bylaw that ensured 10% of sales would be allocated for research and development, while leaving open the possibility that the percentage would increase in the future.

It can surely be said that without Huawei’s 20 years of investment in R&D, it wouldn’t be under siege today. Huawei’s 2017 financial report shows that Huawei has about 80,000 R&D personnel, accounting for 45% of the company’s total; R&D expenses are RMB 89.7 billion ($13 billion), accounting for 14.9% of total revenue. In this regard, Huawai ranks only behind Amazon and Google’s parent company, Alphabet.

In 2012, Huawei CEO Ren Zhengfei said: “We must not be narrow-minded. We do the operating system for the same reason that we make high-end chips. It’s primarily so that others will let us use them, not to make money. When we’re in lean times, we need to be able to use backup systems. Our goal is to be simpler.”

Very plain words, very simple truth. The result is that the Huawei HiS processor was accompanied by Huawei mobile phones. Although more than half of Huawei’s core suppliers are American companies, if the ZTE incident happened to Huawei, the actual impact would be much smaller.

Huawei is afraid of competitors, so it continues investing heavily in R&D, constantly applying for new patents, funding 5G standard drafters and core suppliers of 5G networking. With moats growing ever wider, the restrictions on Huawei are gradually becoming more and more important, as the distance between Huawei and Western competitors is shrinking. Why is the West determined to block the 5G industry? It fears that Chinese enterprises will take advantage of China’s leading edge in 5G technology and overtake others, placing China’s digital economy on the frontier of global industrial technology.

The hegemonic actions of the United States. Since the disintegration of the Soviet Union, the U.S. has become the world’s only superpower. Its military, economy, and technology has greatly surpassed other countries. Through currency, the stock market, credit rating, funds, and other financial means, the U.S. has continued to conduct currency wars and take advantage of global markets. It attracts high-quality enterprises from around the world to go public in the U.S. Through education and the continuous absorption of global talent, it establishes a strong intellectual foundation; through waging of foreign wars, it asserts its influence in regions and draws out local resources; through a global military force, it plays the role of world police; through various alliances, it has become the world’s largest market; through the WTO, the United Nations, the International Monetary Fund, the World Bank, and other institutions, it manages the world’s right to speak.

First, innocent though you are, talent arouses envy.

Second, we don’t need your things, only because you’re Chinese.

Continuous R&D investment and marketing are what will guarantee Huawei’s sustainable future development.

Continued advances into the U.S. market is the ultimate sign of Huawei’s enduring strength. Although there are many obstacles in capital, technology, law, ideology, politics, etc., maintaining fundamental vitality in a market is sufficient to remaining competitive. While being accused of trade protection, we must also blame the so-called “free market” and open-market countries for the bans and sanctions imposed in the name of “national security” and “information theft.” Today, in a globalized, flattened world, the supply chain mechanism simply won’t allow unilateral sanctions to work.

惩罚加拿大完整指南
The “Punish Canada” Handbook
By Huo Ju, a Canada-based programmer who immigrated from China

In this piece, the author starts by pondering how to respond to his friends who are asking him how best to boycott Canada. He first explains that the current most popular method — boycotting the winter clothing manufacturer Canada Goose — would actually be supported by the majority of Canadians, who dislike the company on animal cruelty grounds. He then explains that, in fact, Canada has historically been a friend of mainland China, having for instance opened its market to China before any other Western nation. He says, “If you can’t be friends with Canada, you probably can’t be friends with anyone,” noting that Canada, unlike the U.S., doesn’t try to impose its values, like “adding democracy” (加式民主 jiā shì mínzhǔ) on other countries. There are plenty of in-jokes, where the author uses nationalist rhetoric to make fun of Chinese jingoists.

This piece only lived on WeChat for a day, so the link above is to an archive, but before it was rectified it received over 240,000 views.

I got to say though that protesting Canada Goose is my preferred method! The ad below is sort of like the Patek Philippe ads about how their coats are all about “from father to son.” Canada Goose’s Tai Koo Li Sanlitun flagship store has postponed its opening. I still see plenty of folks walking around with Canada Goose around Beijing, though.

Landscape Painting of the Week

Dream Journey along the Xiao and Xiang Rivers (瀟湘臥遊圖)

As the Song court retreated from the Jurchen invaders, the Chinese 君子, amateur gentlemen painters, caught class-wide depression. Their melancholy and sense of impending doom found representation in their paintings which grew increasingly abstract. As Michael Sullivan argued, this change is style reflects the retreat from the logic-driven Neo-Confucian worldview which had earlier powered the Song Dynasty to heights of Chinese scientific discovery and to paint the Chinese tradition’s most realistic landscapes. He writes that this is a panorama “in which the mist out of which the hills and trees emerge seems to be more real than the hills and trees themselves.” 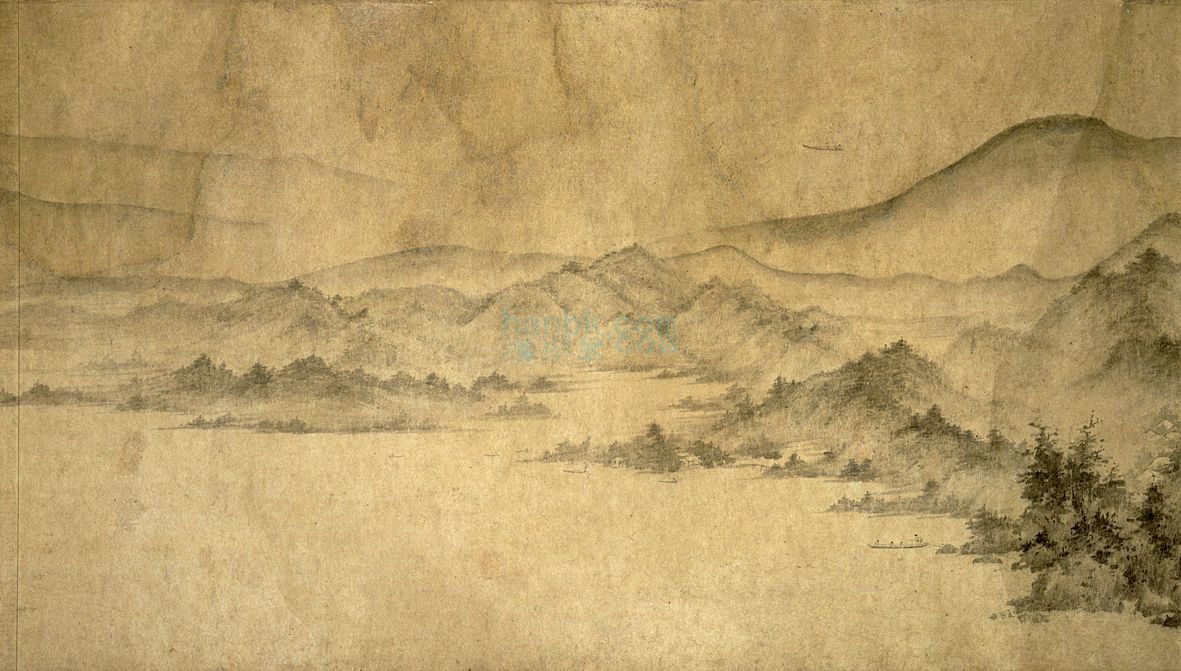